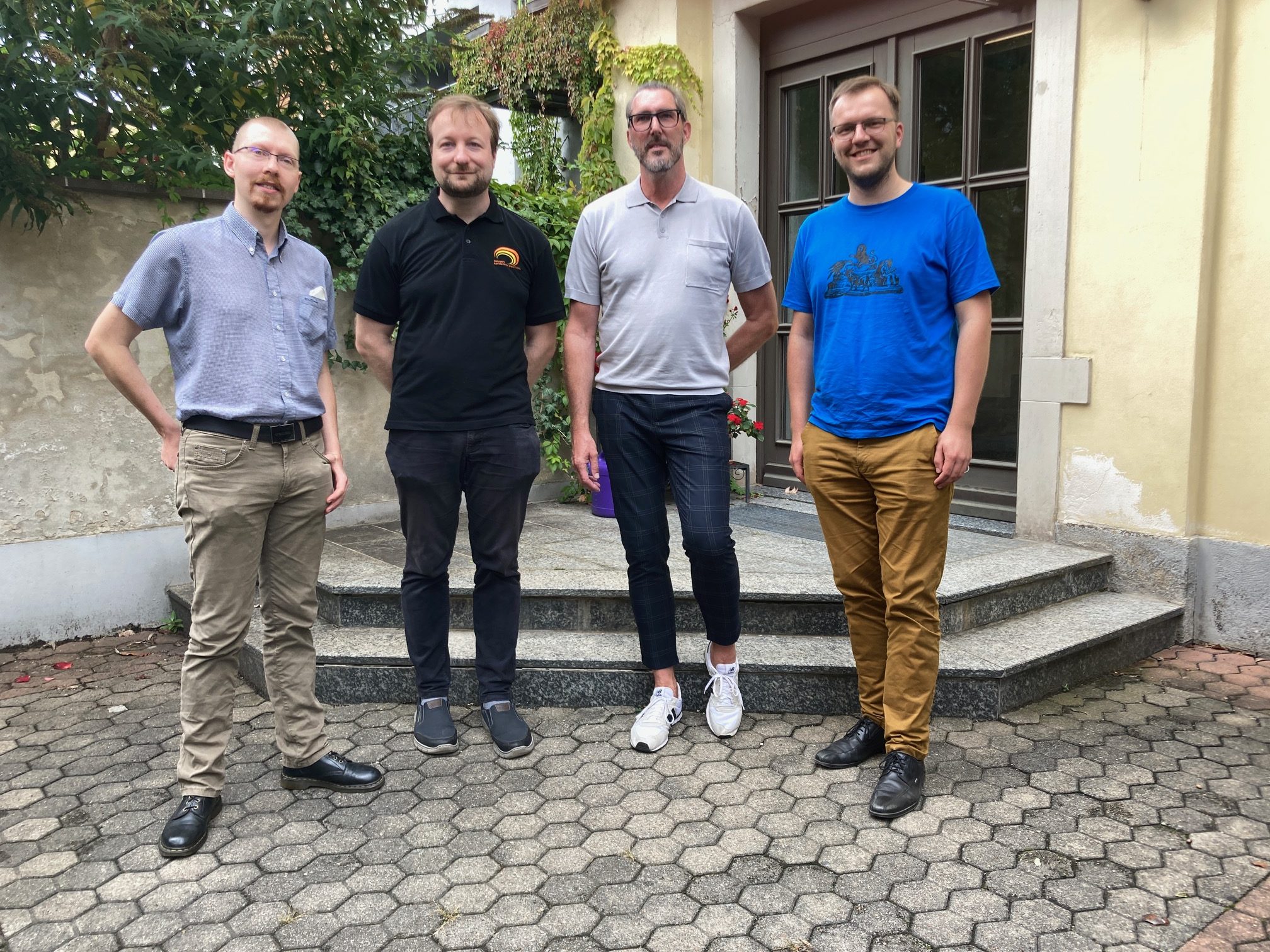 Our meeting in Dresden ended this year again with a meeting of the members of the supporting association Netzwerk Apostolische Geschichte e.V. Some elections had to be held and resolutions passed. A central point was the farewell of a proven founding member of the board.

Sebastian Müller-Bahr had expressed the wish to retire from the office of the second chairman of the network after eleven years of board activity. Although the rest of the board regretted his decision, it was understandable given Sebastian’s commitment in many different areas. So the board surprised Sebastian with a small gift and a presentation that summarized the last thirteen years of his activity in the environment of apostolic church history and the network.

His place as second chairman is now taken by Hans Kuritz (born 1990). He is a high school teacher of music and English. He joined the network in 2019 and since then he has been mainly concerned with music in the apostolic communities in the early 20th century. He is also busy with communicating the work of the network to the younger generation. In the New Apostolic Church, he is involved in various musical activities.

As part of upcoming changes to the bylaws, the board was also expanded to include the office of secretary. Lasse Eggers (born 1986) was elected to this office. Lasse is a practicing Christian and studied industrial archaeologist. Professionally, he manages the museums in the small town of Olbernhau on the Czech border, and he lives his faith in the NAC. He has a special interest in the unity of all Christians in reconciled diversity.

Chief Financial Officer Volker Wissen and First Chairman Mathias Eberle were re-elected by the assembly, as was – as a member with a special mandate – cash auditor Andreas Falk. All elections were unanimous and were held in a very pleasant atmosphere.

In addition, the network deliberated on the already mentioned changes to the statutes. For example, the written resolutions possible under Corona conditions and also virtual general meetings were permanently anchored in the statutes, the office of the secretary was introduced as a board member and a quorum for board resolutions was defined.

The changes to the articles of association were approved by a large majority and will now be entered in the register of associations. The new board will hold its first virtual meeting in the next few days.

The “old” board of the network could still present a combined double annual report for the years 2019 to 2021. Even though the network’s activities on the ground have been severely limited by the Corona pandemic, the association has continued to grow. With 147 members now and steadily growing member contributions as a result, the association appears well positioned for the near future. Also, the donations received for the 2020/2021 archive purchase exceeded all previous fundraising efforts of the network and can be considered a great success. Finally, during the pandemic period, the network continued to expand its virtual presence on websites and through virtual events. As soon as it is possible, the network will also implement presence activities again.

Furthermore, the financial report for the past year was presented to the members and the board was discharged for the past two years after the previous report of the cash auditor.

The annual meeting of the network in 2022 was also discussed. Due to the request of some members, it was considered to hold the annual meeting exceptionally in early summer, probably early May 2022. Location of the meeting will probably be Völklingen in the Saarland. It is planned to get to know the diverse apostolic world of the Saarland there and to deal with local and regional history.